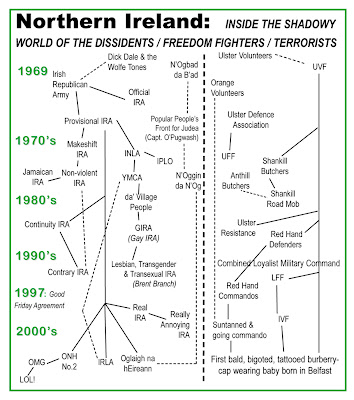 26 mar 09: VICTORY FOR BRAVE SOLDIERS!
Gordon Brown saluted 'a great generation of heroes' as he finally backed a campaign to allow the Taliban to have equal rights to hold victory parades and march through Britain's streets.

OUTCRY AS HEWITT LEADS DRIVE TO ALLOW SICK & WEAK GOVERNMENTS END THEIR LIVES
A campaign led by former Health Secretary Patricia Hewitt to put terminally ill governments out of their misery has been universally backed by MPs on all sides. "This is a very good idea being brought through the back door," said one supporter (cont. p94)

13 mar 09: NEW FEARS FOR JADE
Friends of Jade Goody said they feared for the reality TV star last night, after rumours spread that former Prime Minister Tony Blair was preparing a tearfully insincere speech titled; 'She was, quite simply, the peepul's reality TV star,' and that Elton John was preparing an imminent release of a reworking an old hit of his - 'Goodbye Millwall's Rose' - which will feature a lucrative b-side cash-in (cont. p94).

99% LESS PEOPLE WANT TO MAKE POVERTY HISTORY THAN 3 YEARS AGO UK Charities were in turmoil last night as a new survey revealed that the number of people expressing a desire to ‘Make Poverty History’ had dropped by over 99% since the slogan was first popularized in 2005. The survey, which was conducted by a new study into charitable attitudes, found that the once-stylish charity wristbands had all but disappeared from public view, suggesting that as the financial crisis took hold in rich countries, its citizens had reverted to a ‘charity begins at home’ philosophy, and no longer gave a flying fuck about the starving millions.

Other news: European wristband mountain hits new heights
The wristband mountain that has been growing just outside Eindhoven hit the 1,000 foot mark for the first time yesterday. Rubbish experts at the EU predict that several more million tonnes of hopelessly naff pieces of rubber will arrive at the site by the end of the year, tipping the mountain to upwards of (cont. p94)
lady gaga recession n.ireland timeline