Showing posts from March, 2011
Show All

CAN IT GET ANY WORSE? ... JAPANESE FLEE AS LENNY HENRY & COMIC RELIEF TEAM ARRIVE TO FILM GLOOMY FUNDRAISER First came the earthquake, then there was a devastating tsunami, followed by nuclear meltdowns and the possibility of radioactive discharge. Then rescuers and survivors alike shivered as the snows came, whilst authorities struggle to contain over-heating reactors. Many have said it is like a bad Hollywood movie, but the usually resilient Japanese are now fleeing Tokyo and other major cities in mass panic, after learning that a Lenny Henry fronted Comic Relief team had arrived at Narita Airport, and were said to be 'desperate' to film some tragic scenes and save his career, which hasn't been remotely funny since he rhymed Thriller with Aston Villa in 1984. Henry and his cohorts have also threatened to provide live transmissions of some Richard Curtis inspired 'fun' on Friday evening. Despite a rare TV appearance by Emperor Akihito, who told his peopl
Post a Comment
Read more 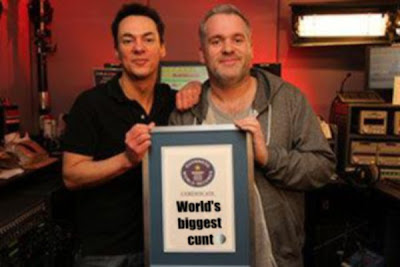 MOYLES SMASHES RECORD 'TO BECOME WORLD'S BIGGEST CUNT' Radio 1 DJ Chris Moyles was said to be overjoyed this morning, after finally smashing the record for the length of time that someone can be a cunt without losing consciousness. The roly-poly presenter maintained a top level of cuntishness for an astonishing 50 hours for Comic Relief, which breaks the previous record set by Josef Stalin during one of his final purges in 1952. "It's something I've been trying to do for a long time, normally people who attempt this are killed long before the 50-hour mark,” revealed the cunt, “So to have the safety of the radio studio was a very good idea.” Listeners who endured Moyles' show confirmed that the Leeds-born homophobe did indeed act like a total cunt for the whole time, citing that he spent the 50 hours laughing at his own jokes, feigning interest in his own drivel, abusing his sidekicks, mocking the weak and vulnerable, and using his money and influence t
Post a Comment
Read more

March 15, 2011
HOLLYWOOD MOGULS FLY IN TO JAPAN TO COMPLETE POST-PRODUCTION ON 'BEST CALAMITY MOVIE EVER' Hollywood directors Roland Emmerich, Wolfgang Peterson and the exhumed, reanimated corpse of Jerry Bruckheimer are all on board a helicopter currently circling the disaster zone in Japan, finalising camera shots for what they expect the be the 'best calamity movie ever.' Every single A-list Hollywood actor available, and Charlie Sheen, are lined up to play the major roles in the new movie, called 'Japan's Dawn of Death,' which is slated in for a big summer release that will undoubtedly take the special effects award at next year's Oscars. Sheen is to play the President of the United States of America, who's estranged daughter happens to be trapped in a school next to the nuclear plant at Fukuova that has been breached by the tsunami and several terrorists led by Alan Rickman. As the United Nations dithers, Sheen hijacks Air Force One and directs it to Ja
Post a Comment
Read more
More posts