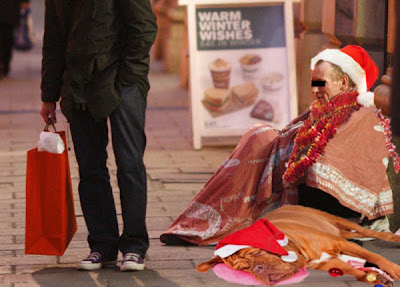 HOMELESS LIGHT UP LONDON THIS CHRISTMAS Spare a thought for London’s homeless this winter, as many are out in force this season to bring some much needed festive cheer to the capital’s weary Christmas shoppers. The growing dishevelled community are out in their hordes on London's streets, making the West End and other main shopping and tourist areas light up - with a little bit of holiday happiness by wearing cheery santa hats, tinsel and flashing fairy lights. The homeless lights were officially turned on by the cast of Made In Chelsea last Friday, and have proved to be an instant success.  “ Some wear tinsel on themselves or their cute dogs, and others actually wear twinkly blinky fairy lights - its wonderful and it really lights up the darkened streets in winter – and what's more its a free treat for the shopper!” remarked a delighted Bond Street visitor Amanda Burlington- Arcade. And Downing Street agreed: “I just want to 'big up' the homeless this C
1 comment
Read more
More posts