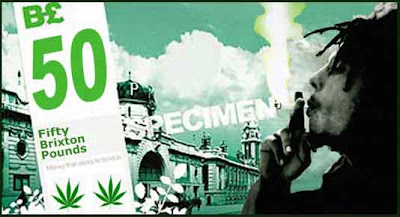 NEW £50 BRIXTON NOTERoyal Mail management has exposed the full extent of the dodgy working practices’ that have been employed by postal workers for decades and are now the reason for the strikes that have brought chaos to the mail system.
Those Royal Mail ‘Spanish practices’ in full:
Wearing sombreros,
Smelling of onions,
Riding donkeys,
Falling asleep drunk under a tree in the afternoon,
Being an air traffic controller and going on strike.

BERLUSCONI CALLS FOR WITHDRAWAL*
*From Afghanistan

Church must lose S&M image to swell members
A man dressed entirely in black who represents the Church of England has described himself ‘frustrated’ and has said that the church needs to shed its ‘suited and booted’ image in order to attract followers of other fetishes. 'Wouldn't Jesus be in the queue at Ann Summers?, said the bishop to the (cont. p9)

GREAT BIKE PARTY IN LONDON
Last week, over 50,000 cyclists reclaimed the pavements of the capital as part of the climax of a summer of cycling initiatives. London mayor Boris Johnson applauded the event, which included several bike-themed competitions such as ‘riding drunk with no lights,’ ‘riding with too much lycra’ as well as the ever-popular ‘screaming at pedestrians who have the temerity to cross in front of you at a zebra crossing,’ and ‘riding through a red light one-handed whilst you shuffle your i-Pod with your child on the handlebars.’

‘WE WILL INVADE POLAND’
Liberal Democrat leader in desperate attempt to gain publicity at party conference. Other plans mooted by Nick Who? include landing on Mars ‘by the end of the decade – not this one, the next one.’

On other pages: Further savage cuts to Lib Dem leader’s image promised (pgZZzzzz)
Is anyone reading this? Hello?? ...No