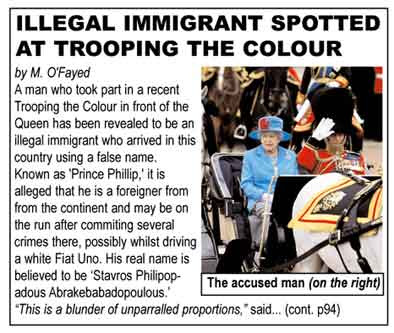 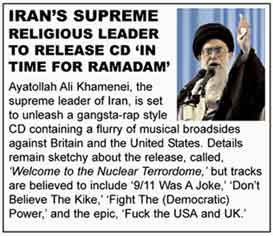 MALLOCH-BROWN: 'Moon IS made of cheese'
Foreign Office Minister, Lord Malloch-Brown has revealed that the Moon is indeed made of cheese, which contradicts his statement last week, when commenting on the Moon landings, he said that 'anyone who thinks the moon is made of cheese is clearly off their rocker.'
However, after consulting with top members of the government and top advisors, the Minister has now revised his initial statement, and now says that the lunar surface is definitely made up of cheese material. Lord Malloch-Brown then went on to point out that Bears do not use the woods to defecate, and that the Pope was definitely not Catholic.

FOOTBALLER TO SUE MAN WHO 'REPEATEDLY HEADBUTTED HIS FISTS'
Footballer Steven Gerrard is to sue the man who he defended himself against in a bar brawl.
Blurry ccTV footage clearly showed the Liverpool & England star protecting himself with his fists as a DJ repeatedly headbutted them, suffering facial cuts and a lost tooth in the process. The man, who is now under round-the-clock police protection in case he decides to attack more wealthy footballers, has been threatened by football fans and other well-wishers. The star revealed his shock about the attack, saying, "What if I was a goalkeeper? He could have seriously damaged my livelihood with his dangerously jerky head movements against my hands."

OTHER NEWS: Amy Winehouse to prosecute woman who smashed her face into the singer's hand at a charity function.

HOLIDAYwatch: Keep tabs on where have our lazy leaders gone this summer...
ELLIOT MORLEY smugly sunning himself, lazing in a deckchair with a drink in hand,
in his back garden.
GEORGE OSBORNE on a yacht in the Med.
OSAMA BIN LADEN walking in the Lake District.
GARY GLITTER at Butlins Holiday Camp, Skegness.
Have you seen someone on holiday where they shouldn't be? Contact GNOME HolidayWATCH now
' Gerrard to sue man who headbutted his fists express coupon MALLOCH-BROWN: 'Moon made of cheese