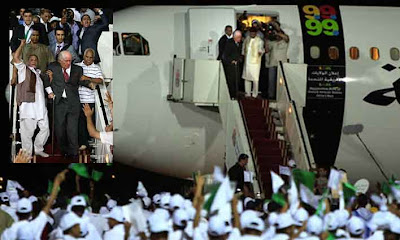 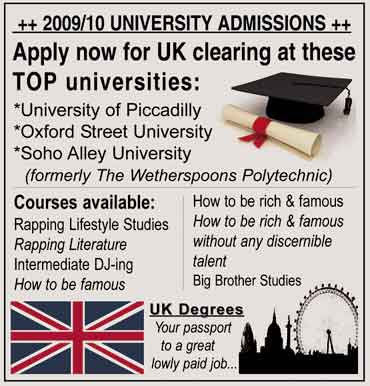 MANDELSON REASSURES PUBLIC HE IS STILL IN CONTROL
Lord Mandelson has assured the UK population that he is still running the country, despite having surgery to remove an enlarged prostate gland. The surgery - which was successful - was performed by the Business Secretary himself, following a local anaesthetic, also applied by Lord Mandelson. The First Secretary of State explained, “Even though I was having surgery, I want to reassure the British public that I was in touch with Downing Street at all times. Although I did feel some very slight discomfort whilst stitching, I was still able to conduct official matters of state with my left hand, by means of a Blackberry.”
It is believed that the Business Secretary communicated several policy decisions whilst on the operating table, and after remaining overnight in hospital he discharged himself, but not before he helped to deliver several babies and perform minor brain surgery.

OXFAM PRESS RELEASE... Announcing the most eagerly anticipated charity offload since the 'The Da Vinci Code.'Six years in the writing, 'The Lost Symbol' is Dan Brown's extraordinary sequel to his internationally best selling charity books, Angels & Demons and The Da Vinci Code.The reading of the ‘The Lost Symbol’ will take place over a 12-hour period, before being donated to Oxfam. From the first page, readers will be intrigued and will feel the thrill of discovery that they will soon once again be dropping off another of Dan Brown’s weighty tomes in a bin bag with other unwanted goods and bric-a-brac.

AFGHAN ELECTION ‘NO MORE CORRUPT THAN A U.S. ONE'

TOXIC SHIP RETURNS TO UK WATERS
A ship containing over 1,400 tonnes of rubbish, including some speeches and slide shows by the former Liberal leader Lord Steel, arrived back in Britain yesterday, after a storm of protest...(cont. p94)
mandy in control scotch boycott univ. clearing ad